In this thesis we aim at giving a general numerical framework to approximate solutions to optimal transport (OT) problems. The general idea is to introduce an entropic regularization of the initialproblems. The regularized problem corresponds to the minimization of a relative entropy with respect a given reference measure. Indeed, this is equivalent to find the projection of the joint coupling with respect the Kullback-Leibler divergence. This allows us to make use the Bregman/Dykstra’s algorithm and solve several variational problems related to OT. We are especially interested in solving multi-marginal optimal transport problems (MMOT) arising in Physics such as in Fluid Dynamics (e.g. incompressible Euler equations à la Brenier) and in Quantum Physics (e.g. Density Functional Theory). In these cases we show that the entropic regularization plays a more important role than a simple numerical stabilization. Moreover, we also give some important results concerning existence and characterization of optimal transport maps (e.g. fractal maps) for MMOT . 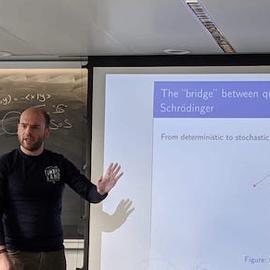